I would like to wish you all a belated merry Christmas and a happy new year.
We have been rather busy and are now enjoying some much earned Christmas lazing around!
I finished work on Friday 19th December and it all started then! With pork being boned and diced ready for making pigs in blankets. 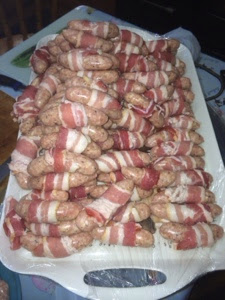 Saturday I spent the day hot smoking pork loins for our thank you presents for friends and family. Mum then gave them a marmalade glaze, they looked and tasted fantastic. 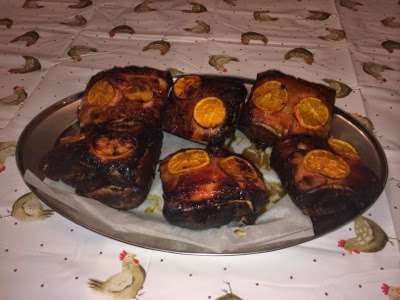 Sunday we cold smoked our hams and cheese. Several friends also brought their produce over for smoking. We had the smoker running for 14 hours, so everything was really well smoked.
Mick also came and dressed the turkeys. We had a really good production line with them all boxed, with their giblets, rosemary and cooking instructions within two and a half hours. We had a real whopper of a bird weighing in at a massive 12.04kg, that is safely tucked up in the freezer for us later in the year. 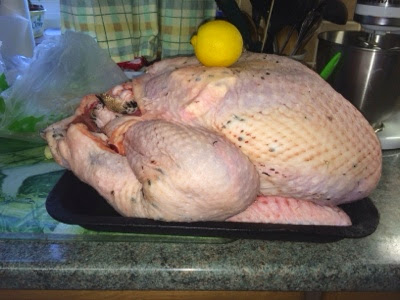 All in all a very productive day. No stopping us though! Monday morning we picked up the beef carcass just after 7am. Gareth just managed to hang it up himself in the fridge before a bacon sandwich and then Eddie the butcher arrived.
Wow is all I can say that man is an excellent butcher, he boned and rolled most of the beef. It worked really well, he broke the carcass down and then passed anything for boning out for diced and minced to Gareth. 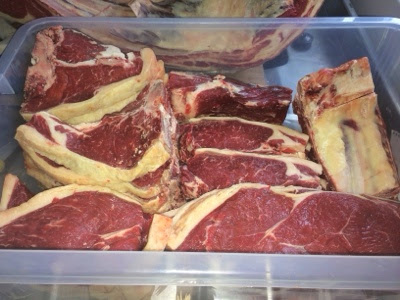 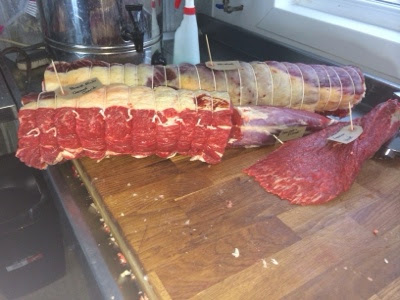 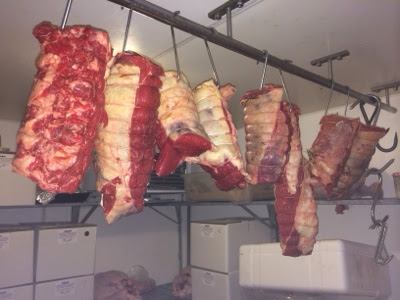 Tractor Bumble arrived mid afternoon to stay with us, we had promised him Dexter Beef steak on his return journey and what perfect timing. So we cooked T-bone steak for Mum, Dad, Nanny, Grandad, Tractor Bumble and Chris. Despite so many people Gareth cooked it a treat and we all sat down at more or less the same time for steak with all the trimmings. God bless Red Boy. 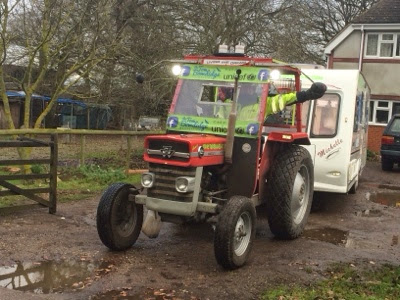 After a late night we didn't wake up until 8.30am a real treat normally we are up long before that. That was only prompted by a phone call that an old friend Kev was on his way to collect his turkey!
So after being a little late finishing the animals we packed all of our orders and I delivered some and then Gareth set off to drop of a few to work friends. Another long day but so rewarding and proud to see what we had produced.
Christmas Eve was far more laid back to start with, as one person collected their meat another arrived by 1pm all the turkeys apart from 1 had been collected. The fridge was looking bare! Gareth went to drop the meat off at his parents which left me at home with Mum, Dad and Chris finishing those last minute bits for Christmas, or noticing than the brand new range cooker had decided that one oven wouldn't work. GREAT with a turkey, pork and beef to cook on Christmas Day! But we decided we would just have to manage and that Grandma would cook the pork only for me to hear HELP, THE COOKERS ON FIRE! Mum was warming the wok for the stir fry we were having for dinner some how with the new massive worker burner the oil had caught fire and the top of the cooker was engulfed in flames. They managed to put it out and all was under control. What a Christmas Eve.
Christmas Day flew past, we were all spoilt. Gareth and I had a certain theme with our pressies BABY. Which is perfect we have many of those essential things for those first few months. After a request I made a changing Mat must have farm animals on it gareth found one with sheep and Mum and Dad had a wonderful canvas of photos done for me of the animals.  Thank you to everyone who spoilt me I am very lucky.
The food was excellent and a real treat to have home grown pork, turkey and beef. As well parsnips and leeks from a friends vegetable garden.
I must say since Christmas, being pregnant has caught up with me I have done nothing but sleep. I have been trying to write this post for days! The baby has started moving around and generally as we are going to bed the baby is awake at around 9.30pm it's great to feel! But today I have been a little more productive.
The pigs are in the concrete stie now, much better for them. Although they are nearly ready to go. Good old Uncle Maurice and Grandad have cleaned the other side of the stie out where the turkeys have been. I am so lucky with all the help they give us. So already for two new pigs in January.
I have weeded some of the garden, trimmed back plants and planted bulbs. My plan is to get it finished before I can't bend over as easily!
Haylage is all moved thanks to Uncle Maurice and Gareth and I am just finishing this post with my feet up in front if the fire with a lovely lime and ginger cordial!
I hope I've not bored you with such a long post, I hope you have all had a wonderful Christmas and I wish you a happy new year. Here is to 2015.
Posted by Unknown at 9:19 AM

Enjoy reading we would love to hear your comments.