I thought I would pop in and give you a little update. We are finally moved in the big room. You wouldn't believe how different it is being at the front of the house compared to the back. The first four nights were terrible. The house makes different noises this side, I was convinced the cats were chasing each other up the stairs but after Mum finding me on the landing shinning my torch down the stairs we come to the conclusion it was the pipes creaking. We had taken the radiators off to fit the skirting board, they had  then been refitted but were full of air. Once dad bled them the noises stopped or we got used to it.
Our poor neighbours, the geese are so noisy, they start making there racket four or fives times a night. Spring is in the air which I'm sure makes it worse but 13 of them make a lot of noise combined with the German shepherd over the road that lives outside that seems to enjoying barking all night. It been a real week of noise. But I think we are gradually getting used to it. We had our first goose eggs this weekend spring is defiantly on its way.
The room is lovely, loads of room. Our pine furniture we have been  collecting looks fantastic combined with another ebay steal. A pine baby changing unit with a draw and cupboard with shelves for an amazing £25. The chap it came from has sanded it down so it needs waxing. The carpet is so soft it's really lovely we are so lucky. Gareth has managed to purchase another chest of draws for the baby. It was on ebay it was in Chelmsford but actually it's tens minutes down the road in Fambridge which was great it looks really nice. 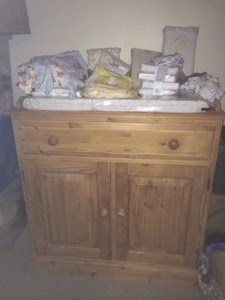 We have had a good sort through all the clothes we have been brought and have a final shopping list of bits to get. Mum and I went shopping to Mother Care, it was awful. We brought a mattress, but they don't sell sheets to fit it. How stupid is that? They were so unhelpful in fact rude! After a baby bath, matching changing mat and storage box, we spent £200. I wish they didn't dominate the high street. We will be finishing our shopping on line I won't be giving them anymore money.
Mum found Chelmsford rather traumatic, so many people a lady singing, young lads playing drums and dustbins. Thank god I don't take her out very often I've never herd someone moan so much! I didn't realise my mother could moan that much. I think she was pleased to get home!
We did buy some lovely huge jacket potatoes from the market and a Muli, we had it for dinner on sunday. It was very watery, I think maybe it needed something else with it.
Finished with a lovely Welsh Rarebit lunch at Lathcoates. It was delicious! Mum and I have had lunch out twice over the last few weeks it's been very nice! It's nice to go into town sometimes but I'm not a regular high street goer.
Spring is in the air on the smallholding, we spent last weekend in the vegetable garden tidying up and setting seeds. I can't believe what a task pushing a half loaded barrow of muck from the muck heap to the garden is. Something I would normally take in my stride is blooming hard work. Mum and dad tell me I am waddling now and bending down is such an effort. But the garden is shaping up nicely.
We are trying to save our pennies what with me not going to be earning, but it got the better of us on Sunday. A chap we no was selling an old cattle trailer, so we brought it. We had been moving the cattle in the horse box which wasn't ideal this is perfect, a much safer option. Maurice also brought a big bale trailer, dad brought a fertiliser spinner for the quad and few galvanised troughs.
The animals are all well enjoying the smell of spring in the air. We have lost one of our turkey hens I am gutted. She was in bed one night whilst the others were still roosting, I put it down to poor weather, however she was dead in the morning, on further examination I found despite them having canvas saddles of there backs to protect them from the stags when they mate. The saddle had failed and he had ripped all of her back open which was infected. She had shown no signs of being off colour. We have decided to spot check them every week as I don't want to loose any more. I am gutted but livestock is dead stock. I sometimes have to remind myself if that.
The wild birds are so hungry every Sunday we fill their feeders and every Sunday they are empty. It's that funny time of year where they have eaten all wild food. The wood is alive though and full of bird chatter which is great to hear. 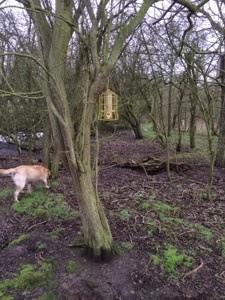 Mother's Day on Sunday, both grandparents and Gareth's parents are coming over we have beef and turkey on the menu!
Posted by Unknown at 11:33 PM

Enjoy reading we would love to hear your comments.