I'm sorry for the lack of updates. Its been a hard few weeks for us on the Smallholding. The week before last we lost Pearl our dear bottle fed lamb. I arrived home from work and she didn't run to the fence. She was laying under the trailer with a very blotted belly. After a fantastic instruction from Sara at Westpoint on Mums Iphone on loudspeaker laid on a bale of straw. Mum managed to insert a needle into the stomach to release the gas. However it wasn't enough and Pearl died ten minutes before the vet arrived.

It was so hard to loose her, we had put so much work into getting her going when she was born. She had spent three weeks in Mums bedroom at night and was a real part of the family. RIP Pearl.

However we have to focus on the 12 other lambs we have, touch wood they all seem to be doing well.

We them moved onto Tilly the Dexter being scanned the following day, she was most put out that an unfamiliar man was going to scan her. She thought she was going to have a scan, she didn't realise he was going to stick his arm inside her up to his shoulder. It made her eyes bulge and she mooed! The verdict was Tilly wasn't in calve. We are all so disappointed, we had hoped she was as she hadn't been Bulling (In Season/Calling for the Bull) Since having her ovaries tickled by a fine looking vet, the day after she was bullying for Britain. So next week she is to return to the Bull in Hockley and she is even taking Dennis to keep her company.

No sooner had the vet left, the Singing Shearer arrived! with a rather lovely Wensleydale Fleece for me from a farm up north. Its so soft. But that's a tale for another night.

Whilist Philip was shearing Mum took the opportuniy to trim feet. So it was a one stop shop beauty salon. hair and nails.

I'm not sure my feet touched the ground much, we had such a lot on the shearer left and them Operation Trustlink started. We helped to give a demonstration at their May Fayre along with some other smallholders. A great day was had by all of us. As well as some bargain 20p seeds.We do love a packet of seeds. However i am banned from Shake and Rake!

Following on from the vets visit. He took some samples away and did a worm egg count. So we wormed all the sheep on Sunday. The start of our new worming programme as per our vets instruction.

We have spent plenty of time in the garden. the Potatoes are doing very well. We have planted Carrots, parsnips, beetroot, Cabbage, Broccoli and Cauliflower. Maurice has also put a lovely wooden edge to the vegetable plot to help making strimming the edge easier.

On Friday, I collected five, four week old meat chickens to raise for the freezer.

Today we moved 4 ewes and lambs to some new pasture. They have plenty grass that should hopefully keep them fed all summer.

I popped off to the Young Farmers show to see one of our friends win the championship prize with his British Lop Pigs today. It was a great to have a walk round the show.

Well off to bed to start a fresh week. No rest for us!
Bee Keeping Monday and Wednesday Night, Smallholders Meeting on Tuesday. The weeks is going to fly by! 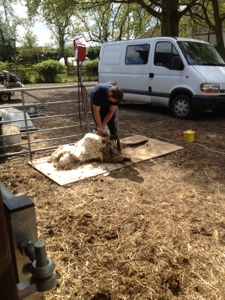 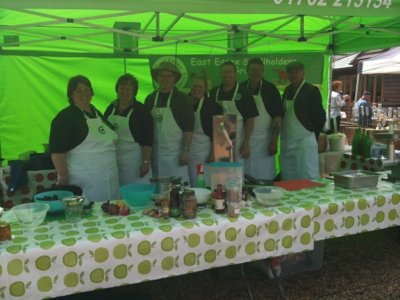 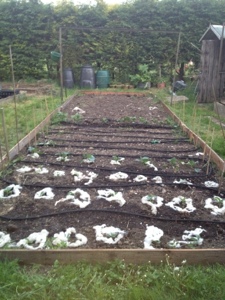 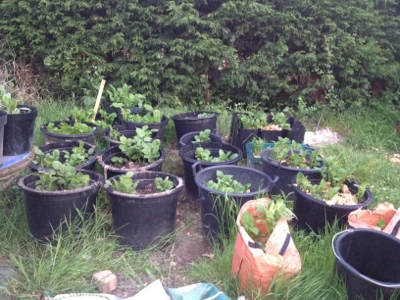