As much as smallholding is a very rewarding way of life it sometimes it is very, very hard.
On Thursday afternoon when Mum was putting her animals to bed she stuck her head in on the goat kids to check they were ok. The sight she found was awful. Edith had managed to get her leg stuck in the hay rack. It was twisted round and she was in a right state. Mum freed her and she just collapsed to the floor. Goats are such playful trouble makers. Poor Eadie was so so sore, nothing felt broken and she had no wounds. I phoned the vet Friday morning and managed to meet her on one of her calls to collect some pain relief, to make her more comfortable.
I'm pleased to report that this afternoon she is putting weight on her leg, so fingers crossed she is on the mend! The hay rack has been removed and they now they have a hay bucket.
Gareth and I had Friday off work, he treated me to a nice bottle of port and maltesers for valentines day and I treated him as well, port and biscuits! What a pair we are!
He was busy getting his silly Subaru MOT'ed so I took the time to make some more hedgerow port using some of our freezer fruit.
We tried mixing a little brandy with our last batch and it's very nice. So much so a whole bottle has disappeared this last week.
Mum and I had a good sort out of seeds on saturday, dare I say it threw some out, dated 2006! Instead of our usual massive seed ordering we actually looked at what we needed, and have a much smaller value of £20 of seeds on order from Premier Seeds on ebay.
The weather was awful last week rain, wind, more rain and more wind. Friday night was terrible, I only got a few hours sleep. We were lucky the only damage was a top that came out of a tree in the wood. No damage caused and one less tree for Gareth to fell.
Talking of trees, in true Uncle Maurice style, the demolition lorry arrived this morning full of tree trunks that had been removed from a site he is working on. Instead of going into the waste chain, we have them to chop up as fire wood. We have cherry, popular and oak. I estimate there is enough logs to keep us burning for a winter. The delivery also had some recycled sheets of plywood to be used for the floor above the chiller. After a bit of attention from Grandad denailing they will continue there life at Furzedown, floors, stable linings and chicken houses. Perfect thank you Maurice!
Today was a beautiful day, however the rest of the berries from the port needed turning into a jelly to sell at the Farmers Market we are attending next month. Once the berries are strained from the port liquid, they are steamed with apples, then boiled with sugar and pectin to make a delicious hedgerow jelly. Well not today DISASTER struck, despite lots of reducing two sachets of pectin, a boiled over saucepan over the hob. We finally reached 105 degrees and the jelly was setting on a plate so we Jared it. We came in after finishing the animals to find each jar hasn't set. I'm so disappointed we have wasted 22 new jars, lots of sugar and TIME. This really is the downside of what we are doing.
Hey ho tomorrow's a new day!
Night Night 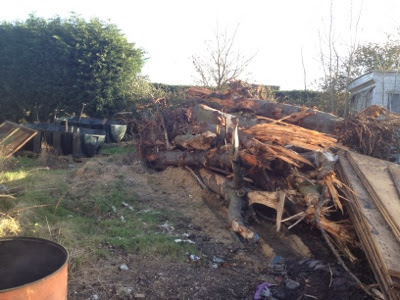 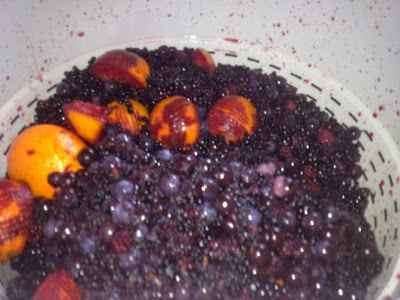